#1 Reason Not To Use Resume Examples From The Internet

Home#1 Reason Not To Use Resume Examples From The Internet 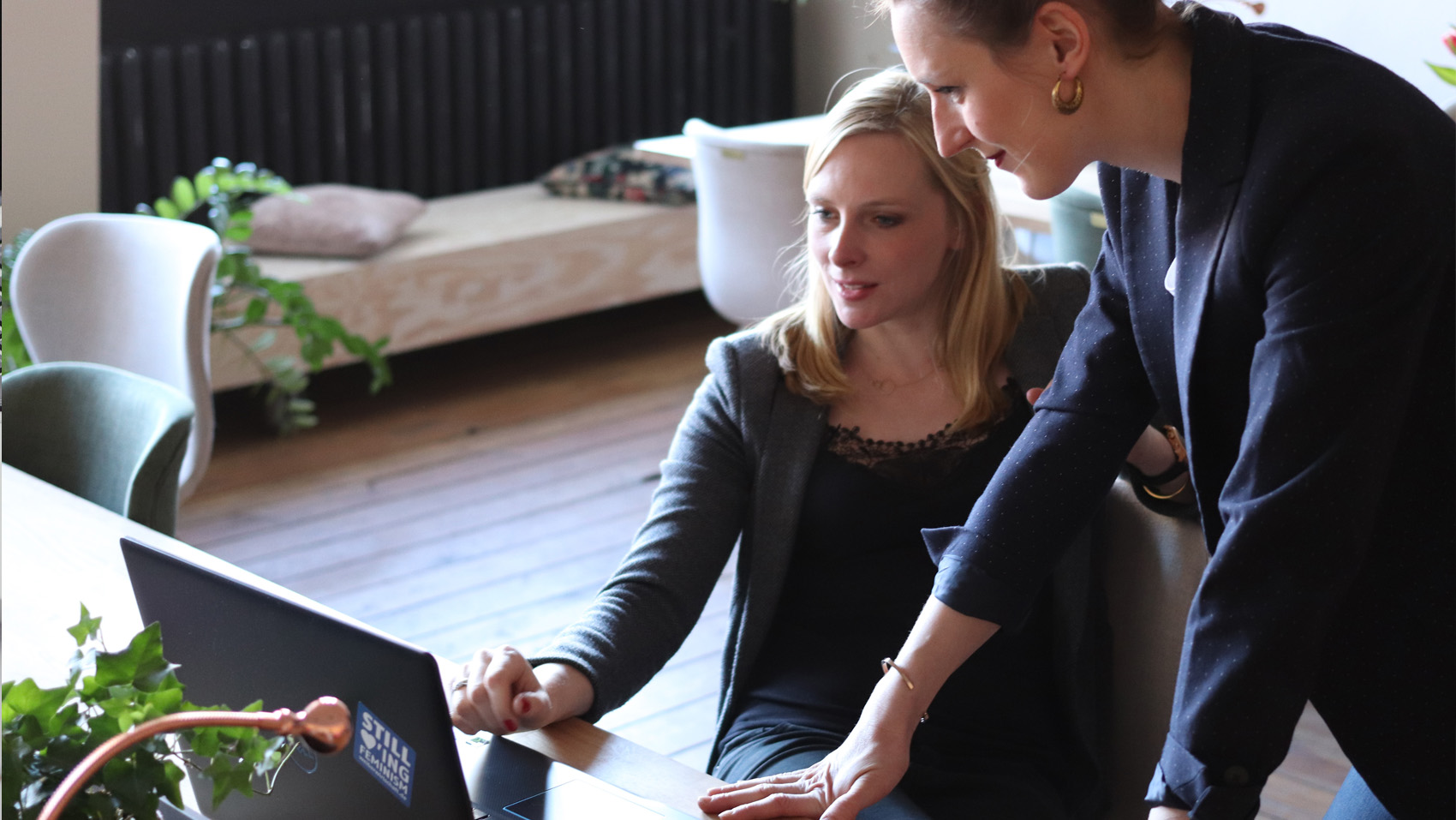 #1 Reason Not To Use Resume Examples From The Internet

Great job opportunities attract a lot of candidates. This means, in order to have a fighting chance, you need a great resume.

Thankfully, the Internet is a great resource which can provide you with clear rules for writing a highly effective resume, as well as guidelines for impressing employers with standout achievements.

Those resources will help ensure that the content of your resume clearly communicates how just good you really are.

However, you may also be tempted to do a web search for some resume examples – and paste the contents of those examples straight into your own resume. Imagine the time you could save, right?

While using online resume examples to “inspire” your own resume is not necessarily a bad idea, you must know that most resume templates that you’ll find on the Internet are quite substandard – and do not have the power to impress potential employers. They may look fancy, and their wording may seem slick, but they tend to lack in a few important areas.

Which is what this article is all about.

I’m going to walk you through a few resume examples and explain why each one doesn’t work. My aim here is to educate you in aspects of resume writing so that you can make smart decisions about what information to include on your resume.

First, remember that a resume is much more than just a listicle of your job history. To knock employers’ socks off, your resume needs to show how you’re uniquely positioned to solve a specific employer’s set of commercial challenges.

Keeping this in mind, let’s take a closer look at the following resume: 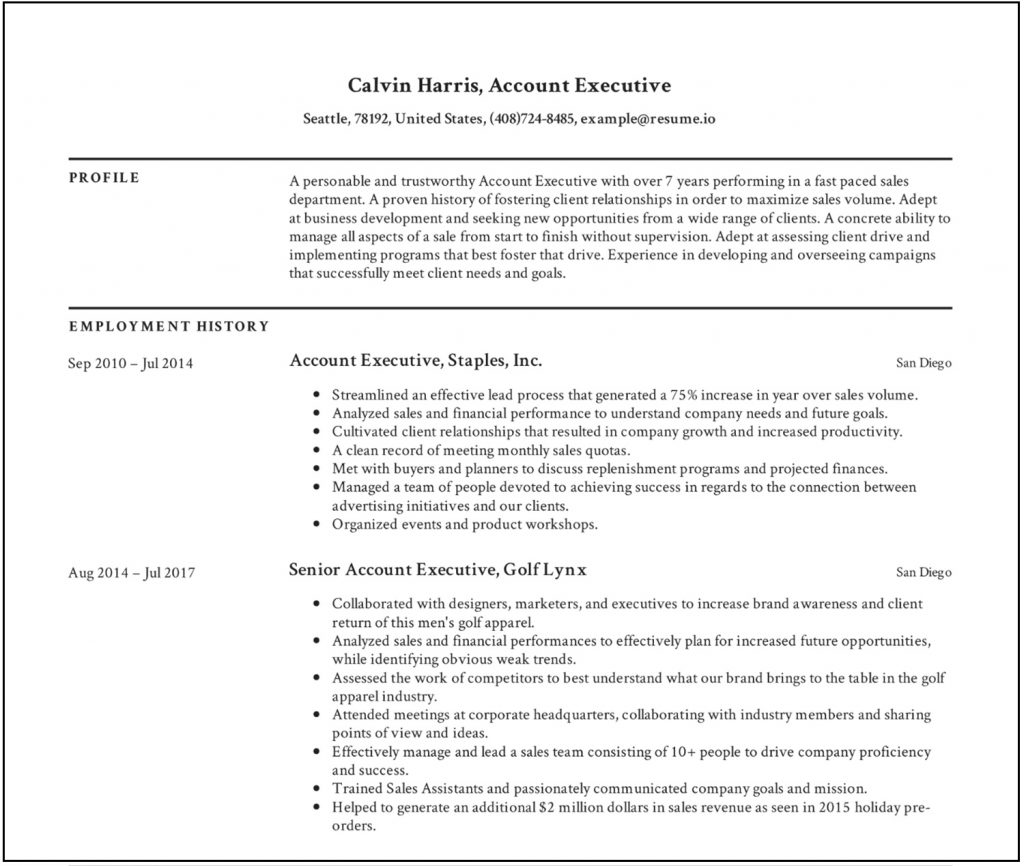 Now, the resume of an Account Executive must be focused on his/her commercial achievements. An Account Executive is a key driver of revenue for a company; as an employer you’d want to be reassured of his/her ability to work independently while consistently producing results.

The above resume example certainly makes a decent attempt to position the candidate as a standout performer through his achievements. The big problem, however, is the resume’s profile, which immediately positions the candidate as a generic, me-too, unremarkable being.

It’s important to remember that kicking off the resume with  “a personable and trustworthy Account Executive…” is far from optimal.

The reality of the modern job market is that being personable and trustworthy is a minimum requirement for just about any job, including that of an Account Executive. This means that the statement in itself is redundant and a waste of resume space, as well as the reader’s time. It offers the employer no insight into why they should consider Calvin Harris above any other candidate.

A resume like this would be effective in only one instance – when the total number of applicants for this position is extremely low. Unfortunately, this is unlikely to occur in the job market of 2020; most positions attract at least 100 candidates. Some employers report well over 500 applicants per role.

By the way, have you considered hiring one of our resume writers to upgrade your resume? Our resume writing service can supply you with a brand new resume within 7-10 business days. 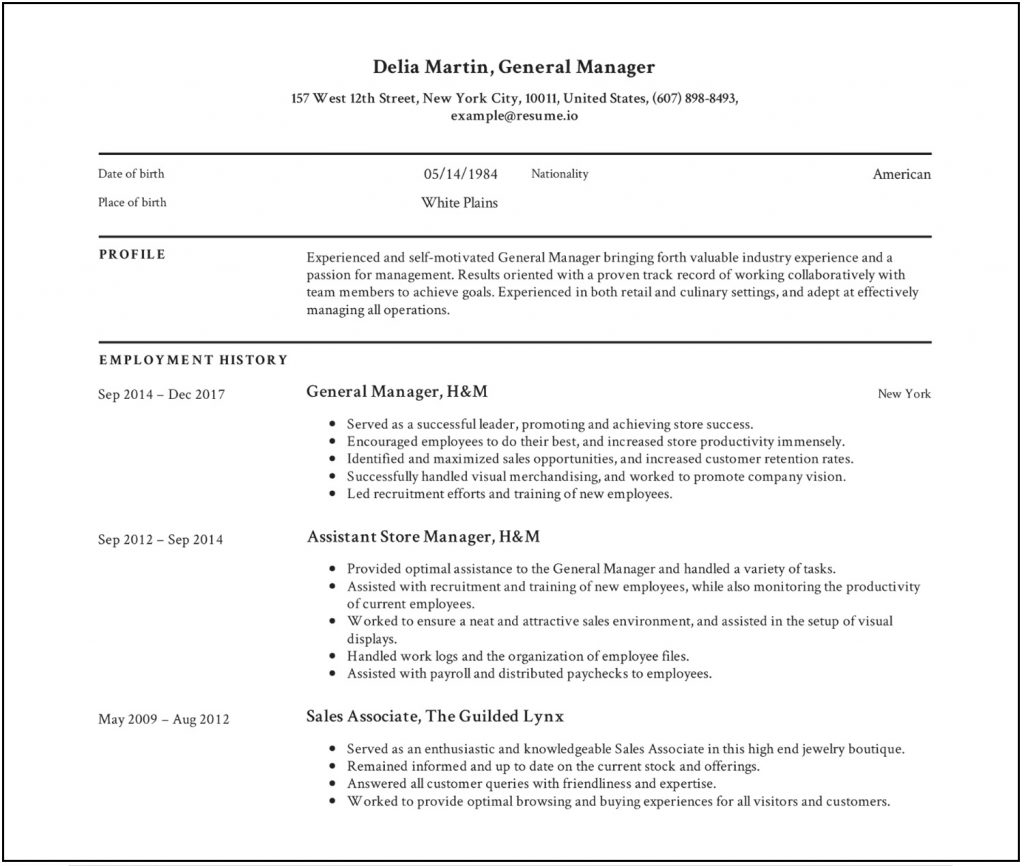 Now that you know what to look for, it’s likely that you realise that the criticisms which applied to the first resume example apply here, as well.

There’s no such thing as an inexperienced and unmotivated General Manager, so pointing out that she is “experienced and self-motivated is simply an exercise in stating the obvious, while wasting space that could be used to sell Delia’s unique value).

Also, it must be mentioned that this resume does an extremely poor job of communicating Delia’s achievements. It lists her duties (and it does so in a rather generic manner), rather than blowing the socks off employers with razor-sharp achievements.

As a result, this resume pitches Delia at a lower level than a true General Manager; it diminishes her experience sells her short of her true potential.

Your resume has the power to set your career on an upward trajectory or to keep you stuck in a job you loathe. It’s one of the most important documents you’ll ever own, so make sure you invest the appropriate amount of time and resources into ensuring it’s as effective as it possibly can be.

Using resume examples for inspiration can certainly help you with this, but be aware that most examples you’ll find online are quite substandard, generic and well, boring. Use my critiques above to filter the wheat from the chaff and get yourself a resume which does justice to your career.

Steven McConnell is a director of two industry-leading Australian career brands - Exceptional Resume Writers and Arielle Executive. His writing has appeared on Inc.com, Business.com, Lifehack.org and many other top-tier publications.

Chris Diprose
02:42 20 Mar 20
Christine was excellent. She walked me through the process, asked open questions, and got as much information from me as possible and then wrote a great resume. I can now tailor to suit jobs, hitting the key points from job adverts. On top of this the coaching she gave by asking the questions has prepared me for job interviews and the kinds of questions I am likely to face.

Sam Stewart
02:28 03 Mar 20
Took the plunge with Exceptional Resume Writers. Got Tom Hannemann. Top notch guy, I hadn't written a resume in over 10 years so wasn't sure where to start. After several back and forth discussions, the guy gave me something that was pure gold. I landed a job at a salary level that I never expected, and the cost was paid back by literally more than ten-fold. I also recommend the interview coaching. I thought that it would all be about practicing answers, but Tom actually really provided a value add, taught me about getting into the right psychological space etc. Real value for money. I thought about cheaper options, but I'm glad I didn't. You get what you pay for, and ERM is worth every cent.

arun rajanna
09:36 19 Feb 20
I am an IT professional keenly targeting senior positions; Christine clearly understood my requirement after initial call and in short duration prepared fantastic resume which I liked very much. Christine is extremely professional, and she provided me lot of feedback which will help me a lot. I recommend resume service from Christine to everyone. Thanks, Christine, for your help.Thanks-Arun

Tony Hoang
23:27 15 Feb 20
Coming out from a long period of working for the same employer I was forced to completely rewrite my resume. This proved to be a difficult task purely because I was targeting a very senior level and I had been out of touch with what the market expects in terms of resumes and cover letters. Christine was fantastic to work with and in a very short time was able to provide a very impressive resume framework and provided key pointers when applying for roles. In a short amount of time I was able to land a role that I had my eye on and I'm sure it's thanks to the resume Christine provided!

Lauren Leong
02:39 05 Feb 20
My writer is so slow in replying. She started OK, and sropped the ball. Left me hanging for 3 weeks after she came back from Christmas holiday, didnt returned my call, email her many times anr no response. I had to email and called to ask if she is still with the company. I gave her my draft, she preety much just copied and paste, didnt really changed it. It is definitely do not worth the price. Save your $700!

Umit Gencturk
05:43 03 Dec 19
My initial expectation was that I would simply pay and have a resume written but they really make you think about your career to put together focused and targeted document. The process does take some time but the end result is worth it.

Bruce
02:00 05 Nov 19
I recently used Tom's serivces to update my resume for a position I was interested in applying for. Tom listended to what I had to say about my career and the position I was applying for and the final product was a very impressive resume that stood out from the crowd. I have no hesitation recommending Tom and I would certainly use his services again should the need arise. Thanks Tom.

Nigel & Michelle Shaw
05:00 22 Oct 19
I would recommend Exceptional resumes writers to anyone who needs help with their resume, covering letters and advice. I received an excellent service.

Aleksandra Subotic
01:21 10 Sep 19
After an extended period of employment, Tom was highly competent in helping me highlight all of my key achievements and strengths in my performance both in my CV and in helping me prepare for the interview process. I found his advice extremely relevant and simple to apply. Within 24hrs after my interview, I was offered the role. I highly recommend this as a career investment for anybody wanting to take articulating their credentials to the next level.

Andrew Zvirblis
10:48 02 Sep 19
I found Tom to be easy to communicate with and extremely attentive to any requests I had, his work is first-rate.

Samantha Scanu
05:42 29 Aug 19
Tom was easy and professional to work with. The results have been great and I would certainly recommend.

/%postname%/
#
Sort Gallery
on
yes
yes
on
off
on
off